The Cost of Hunger

The 2021 edition of the Global Hunger Index (GHI) report ranks India at 101 out of 116 countries, with the hunger situation in the country categorised as ‘serious’. The calculation of GHI is based on four indicators – Undernourishment, Child Stunting, Child Wasting and Child Mortality. Many historical factors, including poverty, injustice, and food scarcity, have contributed to the crisis of child malnutrition in India. Nevertheless, nations with comparable historical and sociological compositions and similar per capita GDP have fared much better. On the Global Hunger Index, Sri Lanka, Nepal, Bangladesh, Myanmar, and Pakistan were ranked higher than India at the 64th, 73rd, 75th, 78th, and 88th positions, respectively.

Proper nutrition is important in the first 1000 days of a child’s life, thereby establishing a healthy foundation for life. Malnutrition at this stage can lead to stunted growth which may affect physical and cognitive growth leading to substandard performance at school and work.

According to the World Health Organisation, malnutrition refers to “deficiencies, excesses or imbalances in a person’s intake of energy and/or nutrients.” As per a report published by UNICEF, malnutrition was the cause of 69% of deaths of children under the age of five in India, and within the under-five age bracket, every second child suffers from some form of malnutrition. India loses 4% of its GDP annually due to malnourishment. The objective of economic development cannot be met without addressing the issue of child malnutrition.

Malnutrition can be traced back to before conception, if the mother has a history of undernourishment. It is also connected with poor hygiene and lack of access to proper sanitation. Malnutrition involves a triple burden for children: underweight, overweight and hidden hunger (a deficiency in micronutrients) and harms children, adolescents and women in the following ways:

a.  Undernutrition: stunting and wasting

b. Overweight (including obesity)

• Poor health and risk of death

The National Family Health Survey (NFHS) is a large-scale, multi-round survey conducted in a representative sample of households throughout India by the Ministry of Health and Family Welfare (MOHFW), Government of India. NFHS-4 was undertaken in 2015-16, with its successor, NFHS-5 being undertaken in 2019-21. 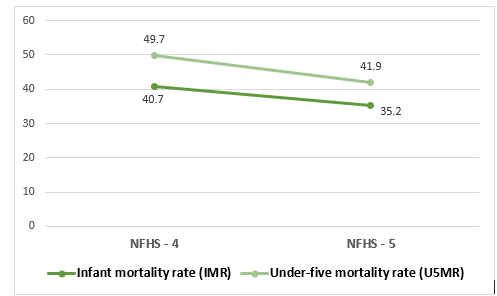 As the data indicates, although three of the five health indicators mentioned have improved during the time period between NFHS-4 and NFHS-5, the numbers are still not ideal.

To tackle the issue of malnutrition and to improve nutritional outcomes for children, pregnant women, and lactating mothers, Prime Minister Modi launched the Prime Minister’s Overarching Scheme for Holistic Nutrition (POSHAN) Abhiyaan or National Nutrition Mission, on the occasion of the International Women’s Day on 8th March 2018, from Jhunjhunu in Rajasthan. The POSHAN Abhiyaan is the Government of India’s flagship programme which directs the attention of the country towards the problem of malnutrition and addresses it in a mission-mode. The mission recognises that the repercussions of malnutrition are lifelong and irreversible and affect every third child and every second woman in this country. The mission also aims at meeting the second United Nations-mandated Sustainable Development Goal (SDG): Ending hunger, achieving food security and improved nutrition.

For the implementation of the POSHAN Abhiyaan, the four-point strategy/pillars of the mission are:

NITI Aayog has played a critical role in shaping the POSHAN Abhiyaan. The National Nutrition Strategy, released by NITI Aayog in September 2017, presented a micro analysis of the problems persisting within this area and chalked out an in-depth strategy for course correction. Most of the recommendations presented in the strategy document were incorporated into the design of the POSHAN Abhiyaan. NITI Aayog has been entrusted with the task of closely monitoring the POSHAN Abhiyaan and undertaking periodic evaluations since its launch. With the overarching aim to build a people’s movement (Jan Andolan) around malnutrition, POSHAN Abhiyaan intends to significantly reduce malnutrition in the next three years.

Keeping the situation in mind, the Ministry of Women and Child Development has received a 16 per cent increase in its budget allocation this year with a sum of Rs 24,435 crore. Out of the allocation, the highest amount, Rs 20,105 crore, has been allocated to Mission Poshan 2.0 and the Saksham Anganwadi scheme. Poshan 2.0 now combines the Integrated Child Development Services (ICDS), Anganwadi services, Poshan Abhiyan, Scheme for Adolescent Girls and National Creche Scheme.

The COVID-19 pandemic has certainly not done the issue of malnutrition any favours. According to estimates by The Lancet, there could be a 14.3% increase in the prevalence of child wasting around the world. India is also likely to witness an increase in malnutrition by nearly 10%, as per UNICEF.

In conclusion, child malnutrition in India is a complex problem that requires a systemic overhaul of the public administration and service delivery systems, as well as participation from the community. It is crucial to strengthen the policy structures and on-ground intervention methodologies to reduce stunting and wasting among children. Community engagement, infrastructural improvements and effective on-ground policy implementation are certainly a few steps in the right direction.

1 Malnutrition behind 69 per cent deaths among children below 5 years in India: UNICEF report. The Economic Times. (n.d.). Retrieved October 13, 2022, from https://economictimes.indiatimes.com/news/politics-and-nation/malnutrition-behind-69-per-cent-deaths-among-children-below-5-years-in-india-unicef-report/articleshow/71618288.cms?from=mdr