Gaming Console Market And Its Road Ahead

With over 2.7 billion gamers worldwide in 2020, the video game industry is undergoing a renaissance. Billions of dollars are poured in as transformations occur on multiple fronts, including mobile, PC, and console gaming markets. Gaming consoles acquire a huge proportion of revenue in the gaming industry, with major players such as Sony and Microsoft acquiring more than 90% of the market. The Global Gaming console market was valued at USD 34.27 billion in 2018 and is projected to reach USD 51.15 billion by 2026 and is projected to grow at a CAGR of 5.3% in the 2020-2027 period.

Clearly, Sony Playstation is dominating the console gaming industry with a 65.05 % market share while Xbox with the 2nd highest share of 34.94% is still in the competition, posing a threat to the existing Share of Playstation. However, this Rivalry between Xbox and Playstation is not new and is carrying on from the past 20 years.

Rivalry between Playstation and XBOX–

Sony’s PlayStation was first officially released in December of 1994, in Japan. It went on to become the leading games console, unseating pioneers- Nintendo and Sega and eventually dominating the gaming console market.

Microsoft learned it’s lessons from the first Xbox to its second model, the Xbox 360 released in 2005, beating out Sony’s release of the PlayStation 3 in 2006. The major reasons behind Microsoft beating Sony this time were-

A brief look at the total sales of all home consoles which came into the market shows that PlayStation has completely dominated other console companies being on the top of the podium, with the PS2 alone experiencing greater sales than both the Xbox 360 and Xbox One combined. 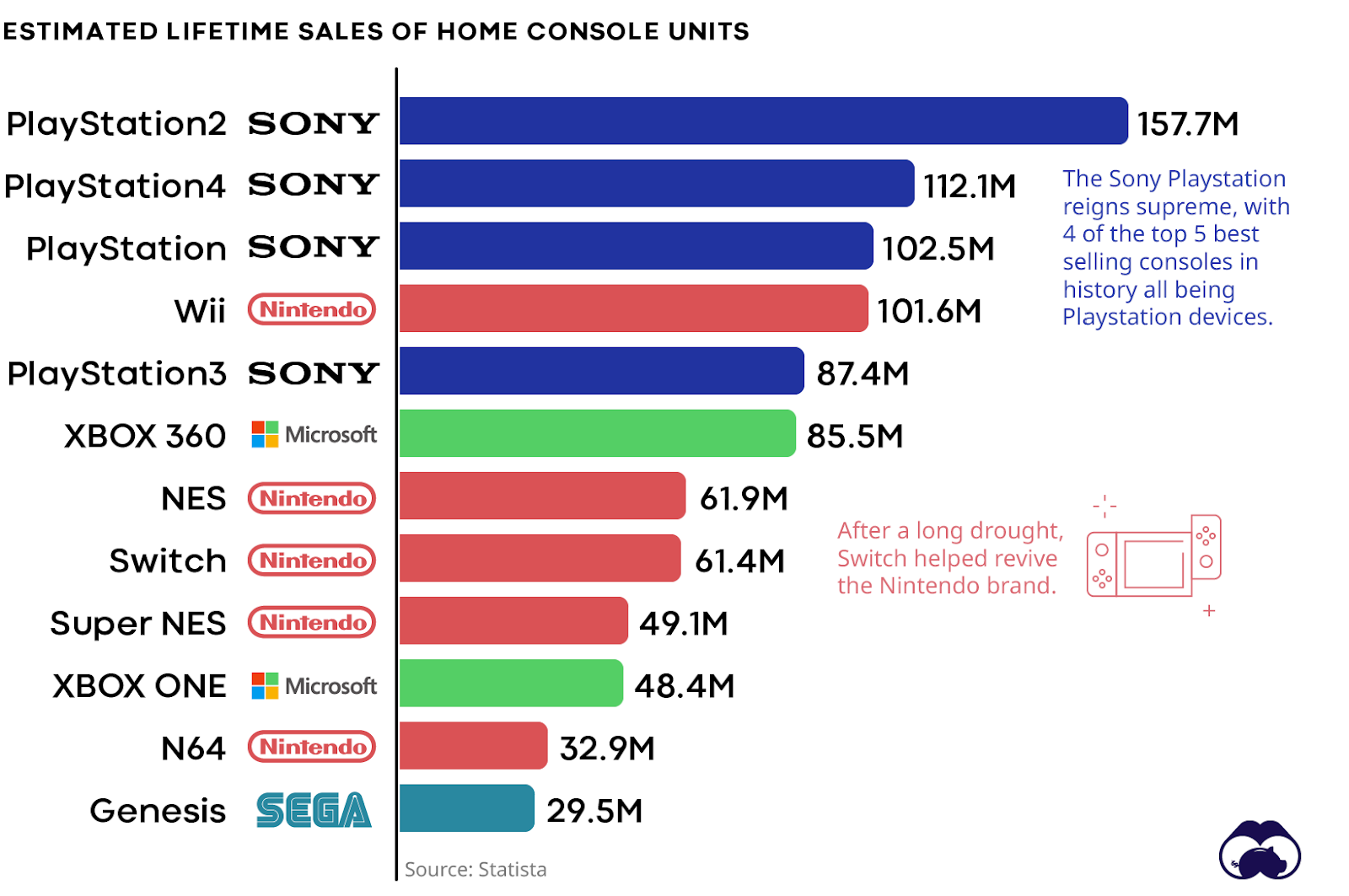 REVIVAL OF NINTENDO- Nintendo which was earlier one of the leaders in the industry in the 1980’s almost perished in the late 1990’s after losing its entire market to sony Playstation and the arrival of Microsoft’s Xbox in 2001 left no chance for Nintendo to make a comeback. In early 2017 when the company released the Nintendo Switch, many thought it would be a huge failure since gamers were already divided between Playstation and Xbox. However, later it was found that gamers have always loved the design and originality of Nintendo. The only thing which they were looking for was portability and this time Nintendo didn’t disappoint them. In the first fiscal year, Nintendo sold 15 million units with more than 63 million games. At present, although Nintendo’s market share is less than 1% however these figures are going to turn around and in the coming years, Nintendo is going to pose a serious threat to Playstation and Xbox.

Since the release of the first Xbox to many of the subsequent generations of gaming consoles that both franchises have released since then, the PlayStation and Xbox have been locked in a ferocious battle that does not look like ending anytime soon. While PlayStation might still enjoy a majority of the market, that gap is now the lowest it has ever been between the two gaming giants. Even more impressive considering, in 2012 PlayStation had over 90% share of the console market. Both companies released their next consoles in 2020, the PlayStation 5 and the Xbox series X And Series S. However, recently many industry experts believe that there is no longer a console war as Microsoft has moved on and has expanded game offerings beyond consoles, such as Xbox game pass and the Xcloud game streaming service, to move away from a console war mentality. With the arrival of the Xbox game pass, Xbox has created a huge library of games for gamers in one place charging them once in a month by following a subscription model. While Playstation is still selling the games separately at a very high cost which is not budget-friendly for gamers considering the fact that they already have spent a large sum while buying the console itself. Experts believe that Sony needs to introduce something fresh and innovative very soon, otherwise in future sony playstation might lose its supremacy in the industry.

A SHIFT FROM GAMING-

Today’s Gen Consoles have immensely transformed and in today’s date, they are much more than just gaming. They have now changed people’s mentality and are positioned  in the houses as a centralized hub for all things including entertainment rather than just being  a gaming tool. In recent past few years gaming consoles have been modified to include the following features –

In recent years For both the Xbox One and PS4, half of all gamers used their consoles for non-gaming activities.

Streaming Games– Streaming technology will become mainstream in the next 10 years.. Many Professional gamers have already started live streaming while playing games through PC; however, it’s not feasible  for each and everyone as it is possible only through a very high-end PC and various gaming accessories which requires a very huge investment. However, by 2030 as network infrastructure catches up it’ll be a very common thing to buy a game and immediately start playing it via streaming, it is also expected that live streaming will also be possible through consoles in coming years which will eventually be more comfortable and will enhance high resolution 8K gaming experience.

Digital Distribution– In the gaming industry Software has always been more profitable than hardware due to obvious reasons of manufacturing and logistics issues. The industry is eventually shifting from physical copies of games to the digital ones. Selling copies of games at a very high price has always been the main revenue stream for console manufacturers. Digital Distribution of the games will allow big profit margins in comparison to selling physical copies. Publishers usually make a profit of $35 on a $60 game sold in store, with digital distribution it is expected that the publishers will make more than $45 on each copy sold.

VR– Virtual Reality can be a much more common component even of non-VR games. There is almost no reason – aside from technical difficulties – not to include VR mode in many genres like strategy games, shooting games or roleplay games. There are already  some amazing and unique VR features like high tech sound effects and realistic graphics out there today, but to have a complete VR experience  there is always a need for initial hardware investment which is still a very solitary experience. These factors have created a barrier to entry for mainstream audiences. New control possibilities, free independently handled cameras and other accessories e.g VR Gun or weapon might make it more realistic. Once these systems are more accessible, at an affordable price the games will just start supporting it eventually.

Cloud Gaming–  Regarding the changes in current gaming ecosystems and increasing popularity of mobile games it is expected that in future, gaming will be dominated by cloud gaming services. Cloud gaming allows a user to play the games that are streamed to their device from the company’s console controller. One of the main advantages of cloud gaming is that it allows users to access the games from anywhere, for experiencing it you don’t need to carry a console with you, all you need is a streaming device e.g a smartphone and controller. Xbox recently launched its Xcloud gaming service; however, it has not been a big success due to lack of various features in smartphones that are present only in PC or console. But in the coming years, it is expected that smartphones are going to be more powerful than today’s PC and maybe today world is not much ready for cloud gaming but in upcoming years it is definitely going to be the most defining technology of gaming.

There are reasons to expect the next generation of console gaming to be the greatest yet. With a more digitally connected world, this new era will see gamers that play and compete with one another from all four corners of the globe. For gamers, this will be a thrilling experience—and for companies, a potentially very lucrative one.